EMPLOYMENT ACT: Foreseeable changes in the near future

Prior to the Employment Act 2/2008, there has been absolutely no legislation or regulation enacted on employment in the Maldives except the regulation established and administered by the President’s Office in June 1994. This regulation was historically the first document that enforced a contract of service to be signed between the employer and the employee and defined the rights and obligations between the parties. However, the regulation was the key reference for government or public service appointments only.  A legal framework for the private sector governing the employment relationship was also drafted and enacted later during the same year. These regulations were amended from time to time and remained in force until adoption of the Employment Act 2/2008 in 2008.

Over the past ten years, there hasn’t been any significant or a major revision to the Employment Act although minor amendments were made few times. The question to ask is should this ten year old law be given a major overhaul or should it be kept as it is? In fact, a major overhaul of employment law is overdue. The constitution is no longer fit for purpose in Modern day Maldives. There are many categories of employment from permanent contract, temporary contract and contract for flexible work arrangements to employees working in factories, and in different industries. The current law provides full protection only to employees in the first category.

The dynamics of the Maldives workforce has changed in the past decade and this has transformed the way people work. What was once genuinely welcomed by employers and employees has changed due to the impact of demographic, socio-economic, technical and political influence and particularly due to changes in the labour market. Issues of work/life balance have become more important in Maldives in recent years, with employees paying more attention to “quality of life” such as parental leave, flexible working hours, high quality child care facility, minimum wage, occupational health and safety, health insurance, equal employment opportunity and the like. The provision of medical leave and other leave entitlements now looks much more like exploitation, made all too easy by.

The Presidential Election of 2018 took place recently in the country. The newly elected President Mr. Ibrahim Mohamed Solih has promised during the campaign to revise the legislations on parental leave and introduction of a minimum wage as a way of regulating and improving the life of the labor force. Let’s look on the impact of introduction of a minimum wage and revision of parental leave.

One final thought about minimum wage. What could be the Maldives first minimum wage rate; a rate between MVR18/hour to 25/hour or above? Can small business survive with a rate above MVR25/hour? When the state own retirement pension scheme was established and enacted, lot of companies including state owned companies  reduced the amount of base pay by splitting it into two and allocating one half of the base pay as an allowance, all to cut cost on the amount the employer has to pay for retirement pension. This reduced the base pay to as low as MVR2000.00 for some employees. Will the introduction of a minimum wage force these employers to revise salary again? Another change foreseeable to the law in the near future is the provision on parental leave. Paid maternity leave from 60 days to 6 months, each time a female employee gives birth and one month paternity leave to male employees when the wife gives birth.

The proposal as suggested by the President Elect is more favorable to the female employees than the current national statutory protection. This will be a very constructive amendment since it will allow female employees more time to recover from child birth as well as time for nurturing.  According to Maldives housing and population census 2014-Statistical Release: iv Employment, women comprised 47.6 percent of the total Maldives labour force. This was a 6.2 percent growth when compared to 2006. Women are projected to account for 53 percent of the increase in total labor force growth by 2020. Since women form a considerable proportion of labour force at present, the benefits of a continuous career should not be denied from them upon child birth.

We find maternity protection and parental leave entitlements in almost every country. The common and central feature is that it allows employees to leave their workplace for a limited time around childbirth and to return to their job afterwards. However, the provisions vary from country to country.  The Table below shows comparison of maternity leave among different countries in Asia. 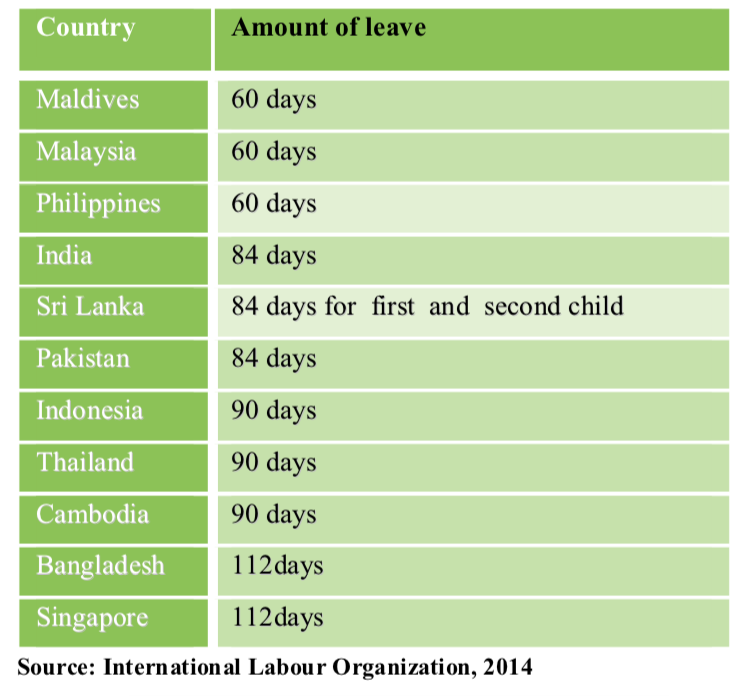 Parental leave protection and other work–family measures are essential to promoting the health and well-being of mothers to ensure a core future generation, and to achieve gender equality and advancement at work for both women and men.  Of course, to achieve greater female labour force participation rates, it will require more than mere reforms to maternity benefits. Other measures could include high quality child care facilities along with flexible work time.

Extended maternity and paternity leave is an adjustment not just for employees, but for employers as well. It requires extra planning and would have to make staffing adjustments which result in added workload on other team members, may have to deal with productivity issues and cover the cost of temporary replacements.

The labour market has undergone a fundamental shift from traditional employment to a dynamic work force. This new era is fuelled by the shifting demographics, rapid technological change, greater individual choices and the global economy among others. The Internet, smart phones, tablet, and mobile cloud computing allows people to link as independent nodes across boundaries which make it possible for work to take place anywhere in the world.  Flexible work arrangement in a manner that benefits both employee and employer are more in demand by today’s generation specially by working mothers and could benefit the aging work force too.

Outdated arrangements for work and an outdated employment law will hurt economic growth. It is high time we confront the reality. Innovative and flexible solutions are key to meeting the challenges of the changing work force. Failing to change could even result in a talent shortage.

Your ticket for the: EMPLOYMENT ACT: Foreseeable changes in the near future

EMPLOYMENT ACT: Foreseeable changes in the near future